Naif Art or Kitsch Design?
Afro Nouveau Fantasy is a series of “crafts-paintings” portraying the epic through carnival point of view. They are classical biblical and mytological allegories refering to ancient and archetypical themes which are able to remain as tradition and cliché at the same time. 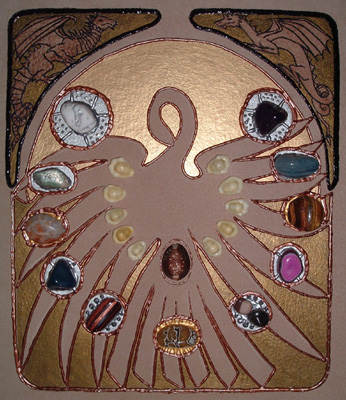 The style
These illustrations are part of a visual research where I’m seeking to establish a relationship between J.R.R. Tolkien’s concept of Fantasy and the Art Nouveau style as a graphic guideline.
Actually, my intention is to relate the conceptual origin of RPG and modern fantasy to it’s visual references, from the Pre-raphaelites and the Arts and Crafts movements in XIX century Europe to recent comics (including manga), games and fantasy and action movies.
Although tecnically different, the Belle Epoque artistic movements had in common the denial for historic themes and inspiration – not copy – in nature. Among all these styles the ones which are closest to fantasy are Symbolism and Art Nouveau. Symbolism – in England, Pre-Raphaelism – sought its themes in mythology and religion with a moral content. Art Nouveau didn’t refer directly to mythology but actually to fragments and loose ideas of legends that survive in our so-called fairy-tales. And that’s why I chose Art Nouveau as inspiration.
Besides, Art Nouveau illustrated XIX century magazines and products publicity, and played the same role that now is played by comics, games, publicity and cinema. For me, Art Nouveau represents the perfect synthesis between cultural industry and fantasy (including Tolkien’s concept of fantasy) as well as it defies the culturally imposed boundaries between Art and Design.
My main inspiration and reference is Alphonse Mucha (1860-1939), the czech artist who became famous in France.

The technique
All these paintings begin as pencil drawings on plain paper which are scanned and colorized in the Adobe Photoshop. The samples were laser-printed in a professional graphic bureau, the plates on 210g pearl paper and the book on plain white 75g paper. The prints were limited.

The references
The New Earth is a metaphor for what I call a symbolic migration. As an RPG scenario, it is a new continent colonized by migrations from Tolkien’s Middle Earth, the old continent, probably after the first great war against Sauron. As sign, it represents the migration of the concept of fantasy developed by Tolkien, from Europe to the New World where this concept took the form of Dungeons and Dragons in 1974. This way, Middle Earth is the sign for the original concept of fantasy, which is a melting pot of saxon, celtic and nordic myths and New Earth is the sign for our south american contemporary concept of fantasy, adding our native myths, as well as eastern and african myths to this melting pot.
I particularly brought to this mixture the african-brazilian myths as reference for the scenario’s cosmogony and pantheon. According to Pierre Fatumbi Verger, a french anthropologist who lived to Brazil and both practiced and studied the afro-brazillian religion Candomblé from Bahia, one version of the Orishas says that they were once mortals who became divinities for their heroic deeds. Each one controls an aspect of nature and human life, but they all answer to the Trinity responsible for Creation: Olorum, the spirit; Oxalá or Obatalá, the male aspect; and Odudwa, the female aspect. In some versions Odudwa is Nanã-Burukê, the grandmother, in some others, Yemanjá, the mother of the sea.
That’s why characters in New Earth may become deities themselves and either stay as immortals or go to other planes of reality! The iconography is a mix of clerical vests from brazilian Candomblé rites, historical and ethnic weapons, armours and adornments and fantasy art dressing. There are also some references to christian saints due to the religious mixing: to convert african slaves, the church tolerated the analogies between orishas and saints; these analogies survive even now when the practice of Candomblé is no longer a crime!